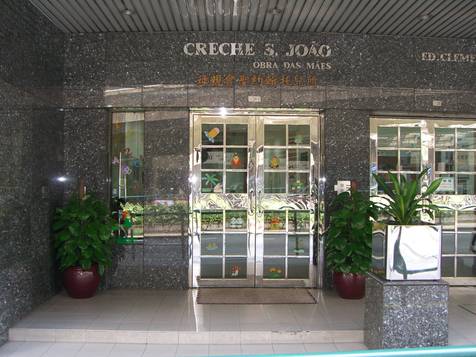 On 28th September, 1970, Obra das Mães established its first nursery, namely St. John or São João in Portuguese, in honor of Saint John the Baptist. The nursery’s mission is to promote universal love, giving support to children from families with financial difficulties and showing the spirit of social solidarity of our organization. Services began in a pink Portuguese colonial house in Avenida Horta e Costa. At that time, there is only 35 children admitted in our nursery, and the number of employees is only 12. However, due to the development of the Society, the number of enrolled children increased rapidly, space and facilities become insufficient. In 1992, a five-storied building finally replaced the pink house, the nursery moved into the first three floors, occupying an indoor area of 1,470.19 sq. m. and an outdoor area of 500 sq. m. on the rooftop. Currently, 274 children were registered between the ages of three months to three years old, the nursery has 12 activity rooms and 57 employees now, including professional teachers, nurses and technical staffs oversee daily operations. It is also one of the highest admission rates of the nurseries in Macau.

The mission of São João Nursery is to keep pace with the evolving demands on the quality of care, encouraging full development of the personality of every child. The key to success is to maintain close communication and cooperation with parents, designing the most effective age-appropriate educational programme and provide young learners with a general knowledge of different fields and contexts. In addition to the constant update of our objectives and teaching methods, the organization focuses on the healthy growth of pupils in terms of their physical and intellectual development, with special attention paid to the stimulation of their intelligence and feelings.